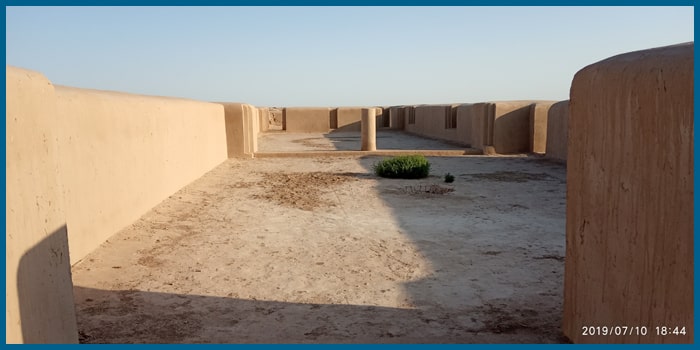 Day 1: Ashgabat
Guide will meet ad accompany you to the capital of Turkmenistan for sightseeing tour. During the travel you will explore the famous sight tours to which are very interesting, Nisa fortress. This attraction is known as the Sanctuary of Parthian Kings that was listed to UNESCO World Heritage Site in 2007. After it you will explore the biggest Mosque in Central Asia Ruhy Mosque or Gypjak, Mausoleum of the first President of Turkmenistan. Moreover you will be impressed to see the famous Akhal-Teke horses.  The place for excursion will be in Horse farm that can be found in Gokdepe region. Here you will enjoy the show where riders will show you their outstanding skills. Then returning to Ashgabat. Night is in the hotel.

Day 2: Ashgabat - Kov Ata - Nokhur - Balkanabat
In course of the tour you will travel to Kow Ata that is known to be underground Lake. The name of this place can be translated as Father of caves. The cave resemble auditorium and its size 230 m in length, its height reaches 20 m, and its width is at some points 57 m. The bottom of the cave is covered with blocks of dissolved limestone (stalagmites) with the warm water you will enjoy breathtaking view of the emerald color of lake. Water has a constant temperature of 33-37 ° C, you can swim in the lake. After it you will head on to Nokhur village that is located on depression valley. The place is full of houses made of cement with mud. Practically all streets here are very narrow exception are main ones. The people who settled this village are quite different from other Turkmen tribes. They live in several villages in the mountainous borderland spanning Turkmenistan and Iran. In course of the tour you will learn that Nokhur is the largest village the population of which only a thousand or two thousand people. Then is transfer to Balkanabat for overnight in the hotel.

Day 3: Balkanabat - Yangykala - Gozli Ata - Turkmenbashi - Awaza
Today you will travel to Yangykala that can be translated as the "fire fortresses". This incredible sight is located at 165 km to the north from Balkanabat and 160 km to the east from Turkmenbashi. You will be impressed by the sheer cliffs that possess white, yellow, ocher, violet and red colors that were shaped by winds and rains. Gozli Ata is your next destination for today you will explore one of the most remote pilgrimage sites in Turkmenistan. Its setting is also one of the most beautiful. It lies in the center of a natural bowl, surrounded by protrusions of strips of pink and white stone. According to legend Gozli Ata was a respected Sufi who lived in the early 14th century. During the travel you will explore his mausoleum that is consist of two white domes, standing in an old cemetery with many beautifully carved stone tombs. The two-headed structure of the mausoleum is necessary to accommodate the length of the tomb: a triangular prism, possibly three ordinary graves long. After that you will be transferred to Awaza. Overnight is in the hotel.

Day 4: Awaza - Ashgabat - Mary/Merv
The day will start with morning flight to the capital of Turkmenistan. After it you will drive to Abiverd that is known as the ancient and abounded city of the country. Ancient Merv is known as one of the most prosperous cities of the Great Silk Road. It was one of the most important capitals of Islam along with Baghdad, Cairo and Damascus. You will have an opportunity to explore such sights as Gyz Gala, Erk Gala, Soltan Gala, Soltan Sanjar Mausoleum, Ibn Zeid Mausoleum. Drive back to Mary city for overnight in the hotel.

Day 5: Mary - Margush - Ashgabat
Morning transfer to Margush. In course of the tour you will explore the city of the 5th center of civilization that used to be an important center for human settlement long before Achaemenian times. During the exploration you will learn that here used to be the Bronze Age civilization that is known as the Margush with the meaning of 'lowland'. This place was found by Professor Victor Sarianidi in the early 1970s. The professor led the Margiana Archaeological Expedition. This breathtaking attraction of the Bronze Age is located at the northern edge of the modern oasis or beyond, on land that is now a desert. People who lived here left it due to the climate change and progressive desertification. The ruins of it were preserved under desert soils. Moreover Margiana attractions have a close connection to sights in Bactria, in modern northern Afghanistan. Sarianidi claims that the Bactria-Margiana complex was a major center of ancient civilization, and even supposes that Margiana may even have been the birthplace of Zoroastrianism. Driving to Ashgabat city. Night is in hotel.

Day 6: Ashgabat
In course of the travel you will have a guide city tour in Ashgabat. During the tour you will have an opportunity to visit such sights as the Revival Park, Russian Market, Lenin's square, Ertogrulgazy mosque, Park of Independence, Arch of Neutrality.  Then you will go to Museum of Ethnography and Museum of Fine Arts. Overnight is in the hotel.

Day 7: Ashgabat - Damla
In course of the tour you will explore Damla village. You will find it in the middle of the arid thickets of the vast Karakum desert in Turkmenistan. This place is perfect choice to learn the traditional Turkmen life. Here just 60 dwellings in swirling sands and the locals live their own life. You will be mesmerized by the isolation that creates its charm. Here you will be able to enjoy the beauty of peace of real Turkmenistan right here in Damla. Night is in tents.

Day 8: Damla - Darwaza
You will be transferred to the highlighted part of the tour, Gas Crater "Darwaza". Tours to this sight is very popular many tourists want to see this place full of mystery. But before you will visit another 2 craters. All of them can be found near the Darwaza, in the west of the main road. The first to visit is a deep round hole that is walled by metal barrier. Here you will not see fire instead you are going to taste a strong smell of gas. Second one can be found at 18 km south of Darwaza. This one also won't show you the fire nor pungent odor. But here you will enjoy the beauty of water through which the gases gently rise. The village was once a sulfur production site, which was closed in the 1960s. It is known that at Soviet time here were works by searching for gas. To visit this interesting site in comfort you need to rent an off road car, as well as a good driver who knows the route. This crater will amaze you by its hypnotizing beauty. Night is in camp.

Day 9: Darwaza - Ashgabat
Today you will return to Ashgabat. During the tour you will explore such prominent sights as Annau "Seit Jamaleddin Mosque" the tour to which are very interesting. Here you will find the ruins of the 15th century Seyit Jamal ad-Din mosque. Continue your transfer to Ashgabat.

Note: Each Traveler should have 2 photos (5×6) to be presented at the points of entry.